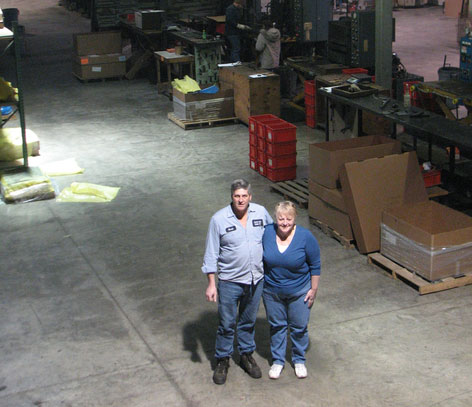 “When we came on board here, we ran it like it was ours. We put a lot of ourselves into it,” Irene Morris said. “I think we’re proud of what we do here.”

The rubber company has an old brand name, but before it moved to Johnson County, it was really just a distributor. Contractors made all the parts, Irene Morris said.

“We were a start-up in the sense that for probably 30 or maybe more years, it was maybe just a distribution center,” she said. “Distribution isn’t all that much cost to set up; manufacturing is because you’ve got all your presses. “Coming into this area, that was probably one of the biggest challenges we’ve had. No one in this area had experience.”

They brought two employees from Michigan, including their son, who now manages a restaurant in Paintsville. But they hired the rest of their employees locally. The Morrises worked to improve the quality of their products and relationships with customers. Atlantic India’s owner, Jim Green, was a former Johnson Countian who knew the area but lived in Florida. He trusted Irene and David Morris to run the business as though it were their own. Irene Morris said her husband, who had served in Germany and Spain in the Army, was the one who talked her into pulling up her Michigan roots to move to Johnson County in the first place. “I didn’t have a lot of faith in my ability,” Irene Morris said.

She had gone to college to be a social worker but got a job as a trimmer at another rubber company. She has learned the business from the ground up over 20 years. She and David met working for the same rubber company, before they were hired by Atlantic India. There were advantages to working in Johnson County: Their boss knew the area and wanted to move; costs were lower than those in factory-saturated Ohio and Michigan; the small-town atmosphere and cost of living appealed to the couple. But there were problems, too. The local business community isn’t geared toward manufacturing. “In Michigan,” David Morris said, parts makers used to be so plentiful “you could just go around the corner and find what you need.”

Now, the Morrises need a tool-and-die maker, for example, but the market is so geared toward the coal industry, they aren’t sure where to start looking locally. Also, they are pleased that one of their Oregon contractors might be opening up facilities in Ohio, cutting travel and distribution costs. When they first moved to Hager Hill, Irene and David Morris lived in their warehouse while trying to establish the business. They had to have machines shipped in and find workers they could train to run them. They still feel like outsiders in Johnson County, but local leaders have welcomed them, Irene Morris said. She has a relationship with the local chamber of commerce, the judge-executive, state representatives. She said she personally knows the local UPS and FedEx workers, as well as bankers and suppliers. “They made us feel like a big deal, even though we were small,” Irene Morris said.

The Morrises were managers, but they knew every job in the business and were hands-on. They filled in for their workers, and they trained a press operator to fill in for them. They bought a house and two cars, and their son eventually moved on to other jobs. “We’re just ordinary people,” Irene Morris said. She didn’t have aspirations to “get rich” or even to own her own business until a couple of years ago, when her boss decided to retire and sell. There were interested buyers, but none with ties to Johnson County. The economy was starting to slide, manufacturing jobs nationwide were disappearing, and the Atlantic India brand might have been valuable enough to those outside buyers without keeping the manufacturing in Kentucky. A few years earlier, a major Johnson County manufacturer, American Standard plumbing parts, had sent hundreds of jobs to Mexico. The Morrises feared Atlantic India would have had a similar fate. The couple made contacts with local government and non-profit groups, as well as the state Cabinet for Economic Development. The Morrises are part of a trend, said Economic Development Commissioner Erik Dunnigan.

In 2010, 84 percent of job growth and investment growth came from existing local companies, as opposed to companies new to Kentucky: “That’s redirecting our efforts,” Dunnigan said. In September 2009, Atlantic India started talking with Mountain Association for Community Economic Development, a Berea non-profit. MACED and Southeast Kentucky Economic Development, a London non-profit, began the year-long process to help Atlantic India secure nearly $1.3 million in financing to buy the company and the building they were leasing. Irene Morris had to write an application for the loan, a three-year forecast, growth projections and a business plan. She said she knew the manufacturing side of her work, but she had to learn quickly about the financial side. Half of the loan came from a federal Small Business Administration program handled by SKED; the other half came from MACED. If the couple defaults, the organizations would seize the business and property. The feeling, when they signed their names to the loan, was both empowerment and trepidation. “We’ve never been that far ever in debt,” David Morris said. But he believed in his wife. Irene Morris is officially the 51 percent owner, which gives the company a leg up in some contracts because it can call itself a “woman-owned” business.

The fact that the Morrises know the business so well made them good candidates for a loan, said Justin Maxson, president of MACED. Irene Morris said she might have given up trying to get the loan if not for such encouragement from MACED and Southeast Kentucky Economic Development. When she’s ready to retire in 20 years, Morris said, “I would like to see a couple of our employees be able to buy the business.”